Morgana is a ubiquitously-expressed protein essential for mouse and Drosophila development, able to regulate centrosome duplication and to maintain genomic stability1.

Morgana belongs to the CHORD containing protein family, since it contains two CHORD (Cysteine and Histidine rich) domains located at its N-terminal. These domains are phylogenetically conserved from plants to mammals2 and mediate the interaction with other proteins, among them the chaperone protein HSP903 and the Rho-dependent kinases ROCKI and II1, 4. Morgana is also characterized by the presence of a CS (typical of CHORD and SGT1 proteins) domain2 at its C-terminal.

The known Morgana binding partners are listed in the table below. 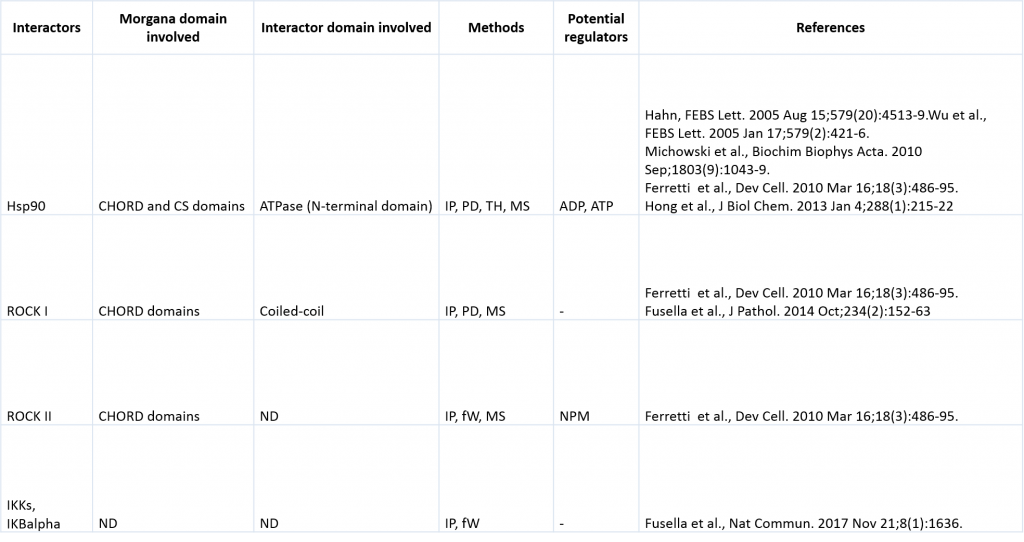 From a molecular point of view, Morgana acts at the crossroad of different signal transduction pathways, acting as an Hsp90 co-chaperone, binding to and inhibiting Rho kinases I and II1, 4 and activating NF-κB5.

ROCK I and II

We demonstrated that Morgana associates to the mature IKK complex and that Morgana overexpression is sufficient to activate NF-κB in primary and cancer cells and to drive cancer progression5. Our data indicate that Morgana is required to connect the IKK complex to IkBa, promoting its phosphorylation and leading to NF-κB activation5.

Morgana behaves both as an oncosuppressor and as a proto-oncogene depending on its expression levels and on the specific cellular context. Low Morgana expression levels, by inducing ROCK hyperactivation, cause centrosome overduplication followed by genomic instability and induce proliferation in specific cell types, like myeloid cells. On the other hand, Morgana overexpression induces tumor cell survival, chemoresistance and cancer progression through the ROCK I-PTEN-AKT axis and the activation of the NF-κB pathway.

Morgana is overexpressed in a subset of human breast cancers4, correlating with metastasis formation and poor prognosis5. We found that high Morgana expression levels confer pro-survival abilities and chemoresistance to breast cancer cells4 and we defined an essential role for Morgana in tumor growth and metastasis formation in pre-clinical models of breast cancer5. In particular, high Morgana expression levels in cancer cells decrease NK cell recruitment in the first phases of tumor growth, while, later, it induces neutrophil colonization of the primary tumor and of the pre-metastatic lungs, fueling cancer metastasis5.